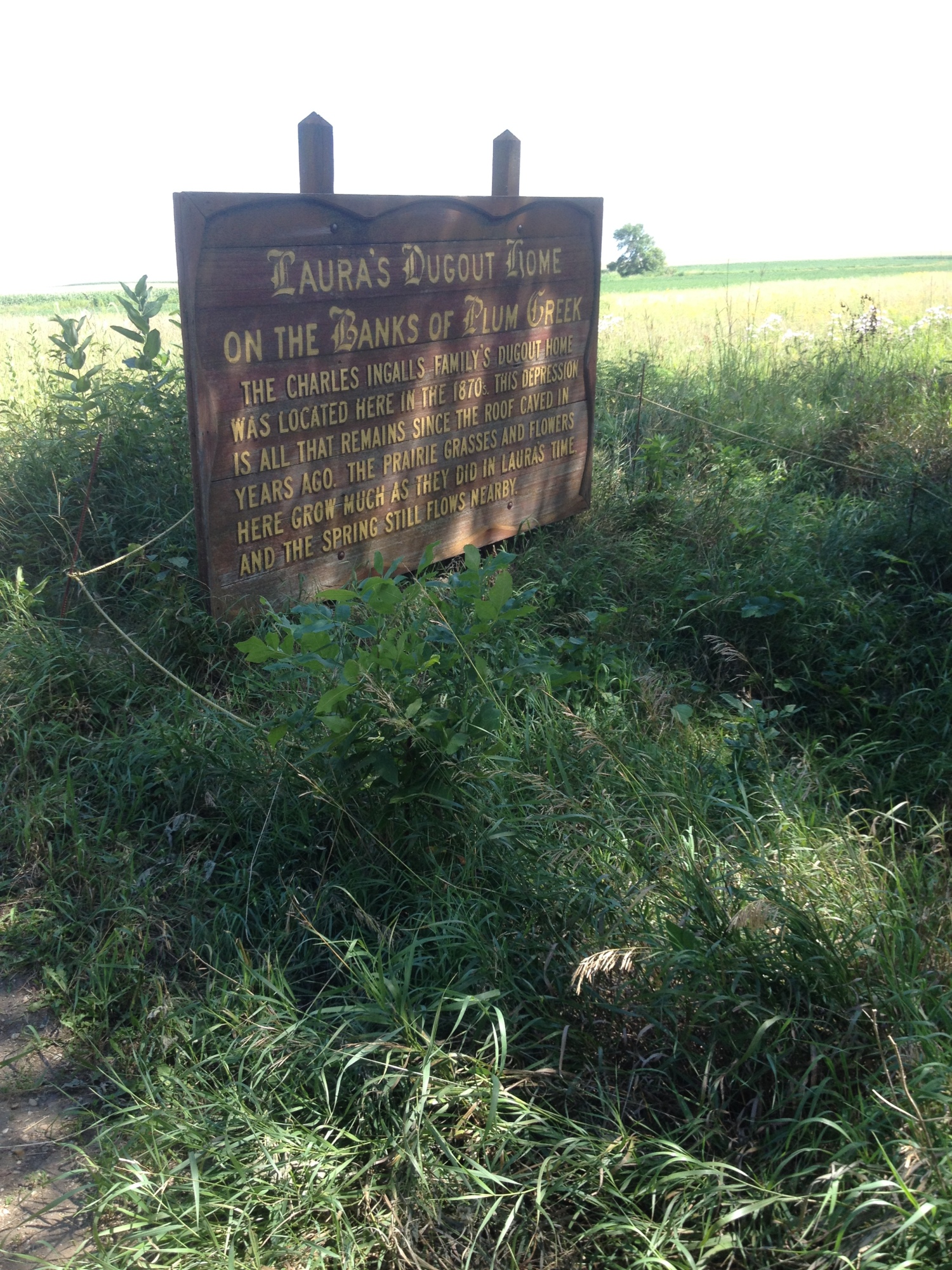 In the opening pages of On the Banks of Plum Creek, we see the Ingalls family arrive to a property just north of Walnut Grove, Minnesota. Laura recounts how when they arrived they saw what looked like a stable for horses, but no house could be seen. Only after she followed a path down to the creek did she see the door on the bank of Plum Creek. That door would open to the Ingalls’s new home near Walnut Grove, beginning in the dugout itself which would be followed by the house Pa would build for Ma and the girls. Pa and Mr. Hanson agreed on a trade of two horses for the land. So begins the next two-year stint (1874-1876) of the Ingalls’s latest homestead.

According to the Walnut Grove website, the property was bought in 1947 by Harold and Della Gordon, and shortly after they purchased it, the illustrator for the Little House series, Garth Williams, informed the Gordon’s that the Ingalls’s dugout was on their property. Today, tourists may still visit this site and are asked to make a donation on their way to see Plum Creek, the dugout, and imagine the many scenes of childhood play and farming challenges as told by Wilder.

In the summer of 2015 our family visited Laura Ingalls Wilder sites in DeSmet, South Dakota, Pepin, Wisconsin (see Wilder Side of Life #2), and Walnut Grove, Minnesota. Naturally, we paid homage to the dugout site and soaked in the blue skies, green meadows, and cool flow of the creek. Pictured below are the dugout and sites around it. 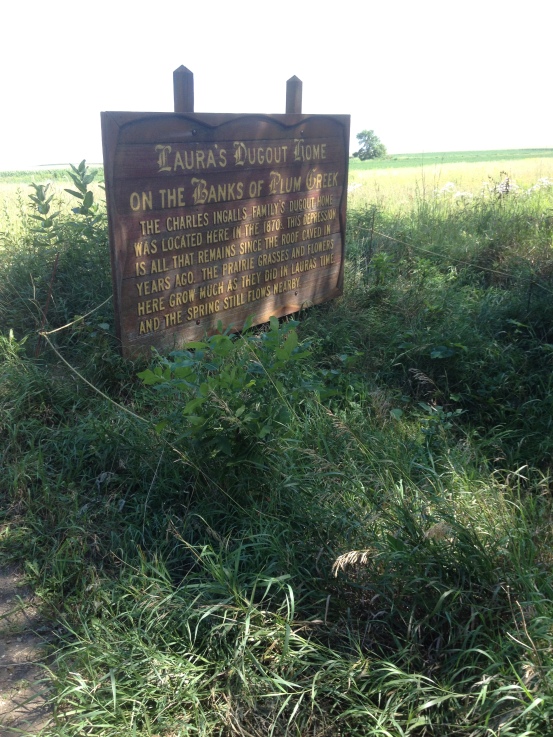 Presumed Location of the Dugout 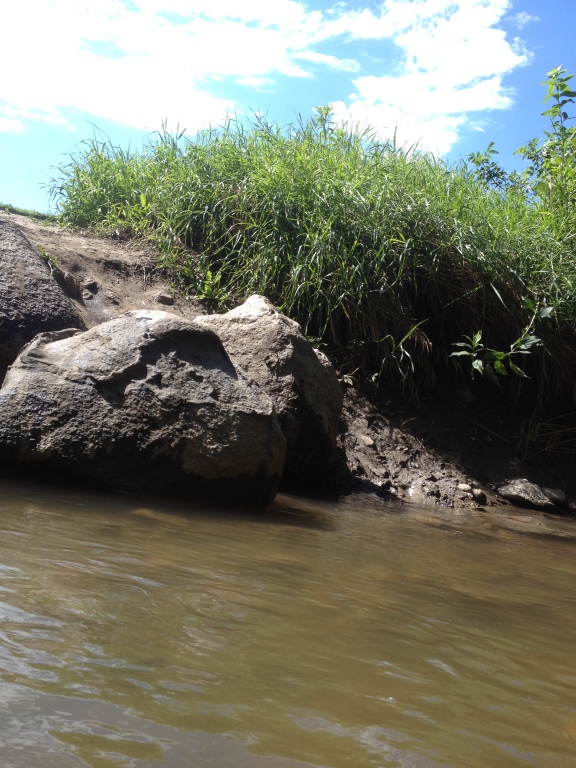 The Meadow and Path to Plum Creek

I was particularly excited about visiting Walnut Grove, because up until that summer, the Little House television series was my only exposure to the Ingalls. I knew that Walnut Grove was the setting for the show, and I eagerly anticipated seeing for myself how closely the TV magic matched reality. In short, to my disappointment, one cannot see the golden hills of California in the flat farmlands of southern Minnesota. Walnut Grove of real life does not resemble the set of Little House on the Prairie on television, but in a way the disconnections between the show and the book are fitting.

The real Laura Ingalls Wilder, her children’s books, and the television series (aired almost twenty years after her death) all carry their own narratives that comprise the entire package of what fans know as Little House. The relationship has been compared to a three-legged stool. The three legs of the Little House story have together cast a wide, multi-media net into fandom. In the case of Walnut Grove, the fame of the television hit, Michael Landon (Charles), Melissa Gilbert (Laura), and the rest of the cast have positioned Walnut Grove as a must-see stop for Little House pilgrims, never mind the fact that the Ingalls only lived here for two years and that the location was only the setting for one book.

All major Little House sites have museums, but the museum at Walnut Grove is one of the larger ones. In fact, it’s at the Laura Ingalls Wilder Museum of Walnut Grove where I bought for my wife a complete set of Wilder’s children’s books, the same set I finally got around to reading myself and became hooked. Perhaps because of the TV connection, this museum has more to display regarding the TV series, the actors, and their time spent in Walnut Grove. When cast reunions occur, they tend to be here. You may wish to mark your calendars for the next cast reunion scheduled for July 11-14, 2019. (Click here for the brochure.)

In addition to the indoor displays that feature memorabilia from the books, the time period, and the TV show, the museum has set up an outdoor park of pioneer period homes, the one-room school house, and even a jail. The pictures below are of our family trip to this museum.

The Outdoor Museum at Walnut Grove 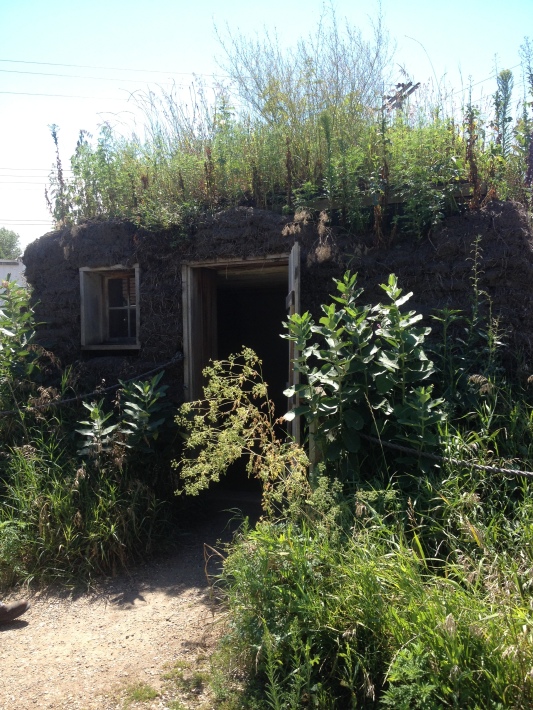 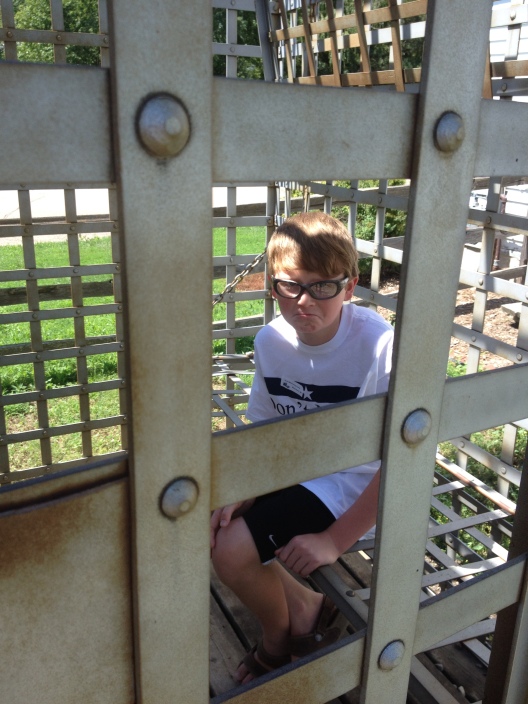 We had just missed the Wilder Pageant season when we were there, but the pageant at Walnut Groves is unique to events recorded in On the Banks of Plum Creek. Here’s a list of the scenes. If you are familiar with the books, you can see that most of the scenes represent the major events that Wilder described in Plum Creek:

On the Banks of Plum Creek has so many stories of survival and tenacity that we readers of the Little House series have grown accustomed to reliving with little Laura. Specifically, we read about the wild fires, the grasshoppers, the dangerous winter storms, and the challenges homesteaders faced as they tried to work the land and produce a crop that would support their costs of living.

In addition to these obstacles, we also see introduced into the series Laura’s arch nemesis, Nellie Oleson. Nellie was the rich town girl who looked down her nose at the poor farm girls outside of town. Laura resented Nellie’s snobbery, and for years to come the Nellie character (not just one person in real life) would be a constant reminder to Laura of her humble upbringing and the need to develop one’s inner character over the external facade of material possessions. (For a good summary of the real people behind the Nellie Oleson character click here.)

The focus on developing one’s inner character is the trait of greatness with which I would like to bring this post to a close. The Ingalls and later Laura and Almanzo struggled on the farm. Wilder’s books recount crop failure after crop failure, and most of the time it was not because of lack of skill or determination. Whether fire, grasshoppers, long winters, or storms, it took a long time for these homesteaders to find a way to have success in the material sense. Furthermore, these so-called failures played a big part in why the family had to move so frequently until they finally could make things work out.

Yet, in spite of their financial difficulties, Charles and Caroline Ingalls taught their daughters to work hard, respect others, and never give up. No matter where they lived, Charles gained the respect of the towns people. Where there was a church, they were part of the church community. In Plum Creek, Wilder tells of how Pa went to town to buy some boots but ended up donating the money to help the church buy a bell for the belfry (click here for more on the bell in Walnut Grove). Putting others first over their own material gains was a value that shaped little Laura’s inner character.

The stories of young Laura demonstrate her early resistance to and later internalization of having an inner character of integrity. As I have read the Little House series, especially Plum Creek, I am reminded of the words of Jesus, “You shall love your neighbor as yourself” (see Mt. 5:43; 19:19; 22:39; Mark 12:31).

I believe that Charles and Caroline knew that if they would put others first over their own desires and goals that God would provide for their needs. In doing so, they trusted in God, made a difference in their communities, and helped instill values that would later be read by millions.

Oh, before I forget, I even found a little bit of Westbrook history in southern Minnesota. I don’t know the back story to this little town, but it’s cool to see my last name on a water tower and town sign!

Wilder Side of Life #1: Introduction to the Journey

Wilder Side of Life #2: Little House in the Big Woods

Wilder Side of Life #3: Little House on the Prairie